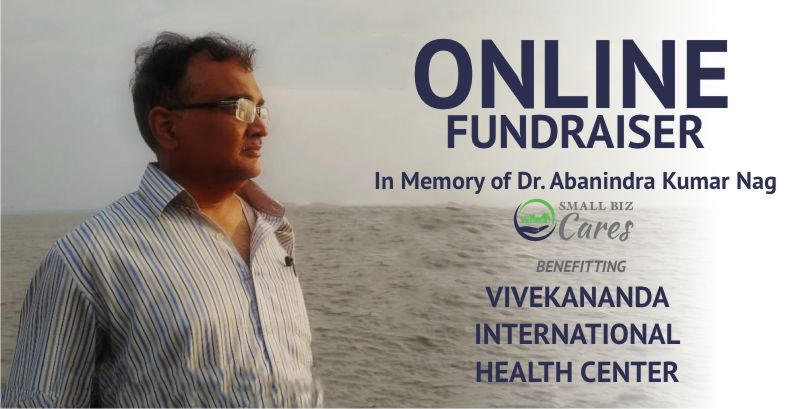 We are like the leaves of a huge, universal tree. Driven by intolerance and greed we disclaim the rights of others. But we forget that the leaves cannot survive apart from the tree. No one can be at peace while others are unhappy. No one can enjoy prosperity while surrounded by a world of poverty.

Proceeds from this fundraiser will go to Vivekananda International Health Center (VIHC) to perpetuate the humanitarian mission of its founder, Dr. Abanindra Kumar Nag who died after contracting COVID-19. VIHC is a non-profit voluntary organization which was founded by Dr. Nag with his colleagues and well-wishers in 1984 to provide healthcare in underserved communities in Kolkata and outlying areas with the goal of “HAPPINESS FOR ALL, HEALTH FOR ALL”.

VIHC has provided emergency medical relief during natural calamities and health care to the impoverished. It established a health complex in Sankua, Diamond Harbor to provide preventive and curative health care in rural outlying areas. The building is also used to educate and provide lunch to children in those villages. VIHC has conducted seminars and rallies in slums and remote underserved villages to create health awareness and help prevent the spread of epidemics such as HIV.

Dr. Nag passed away on May 26th, 2020 as a result of contracting COVID-19. He is survived by his wife, Suchandra Nag, his brothers Subir Nag and Achinta Kumar Nag, his sister-in-laws Sima Nag and Dipa Nag, and his nieces, Sunita Nag Bansal, Sumona Nag Adhya, and Pekham Nag.

Proceeds from this fundraiser will be used to purchase Personal Protection Equipment (PPE) for frontline workers in Kolkata and sustain the mission of VIHC. Frontline workers in Kolkata are especially vulnerable to COVID-19 because they have inadequate PPE and are working in a densely populated city. In addition, Cyclone Amphan ravaged Kolkata on May 13th, 2020 causing widespread damage to infrastructure, further exacerbating the poor health conditions. Please consider donating through the button below.

Although I have spent the past three months learning about COVID-19, watching the grim statistics climb all across the globe, one cannot fully prepare for the devastation of this disease when it hits your own family. My uncle (mejo kaka – father’s younger brother) passed away May 26, 2020 after contracting COVID -19. He was a doctor who touched many lives through his service in the greater Kolkata area. He was passionate about public health and founded Vivekanda International Health Center (VIHC), an NGO (non-governmental organization) to provide healthcare where it was needed the most. He provided emergency medical relief during natural calamities and health care to the impoverished. He established a health complex to provide preventive and curative health care in rural outlying areas. He disseminated public health messages to educate the public and help prevent the spread of epidemics such as HIV.

However, to me he was my uncle. He took me on my first and only ride on a motorcycle (his preferred mode of transport in crowded Kolkata streets). He took care of any of my ailments during my trips to India. He loved children which was evident to me ever since I was a child myself. He never outgrew his love of play. He was very funny. He could inject levity into all situations – even the most somber. He never took life too seriously. I believe he would be amused at the irony of God’s final joke….that he devoted his whole life to heal the sick and prevent the spread of diseases, but ultimately succumbed to a global pandemic. My heart hurts for my surviving uncle, cousin, and aunts who shared a household and must now grieve in isolation (even from one another) during the quarantine period. The simple act of a hug as a condolence is denied to them at this time.

Being halfway across the globe, I did not think there is much I can do…but there is. His humanitarian missions do not have to end with him. We can provide Personal Protection Equipment (PPE) to the frontline workers in Kolkata who are especially vulnerable in hopes that they are spared from COVID-19 and can continue to serve humanity in a city that is not only battling a pandemic but was also recently ravaged by cyclone Amphan.

If you wish to help the frontline workers in Kolkata, you may consider donating to Small Biz Cares’s fundraiser for Vivekananda International Health Center (VIHC). The proceeds will provide the PPE for the frontline workers in Kolkata and continue my uncle’s humanitarian missions. At a time where words are hard to find and personal connection is difficult, this gesture of love, connectivity and support would mean the world to his surviving family. Your gesture will perpetuate my uncle’s legacy of serving humanity

Vivekananda International Health Center was created on January 12th, 1984 in West Bengal on the birthday of its namesake, Swami Vivekananda. Swami Vivekanda was a Hindu monk and is credited with bringing Hinduism to the status of a major world religion during the late 19th century. His ideal of “selfless service to mankind for one’s emancipation” was the inspiration for Dr. Abanindra Kumar Nag and the others at VIHC.

VIHC provided disaster relief and healthcare to the impoverished.  In 1984, VIHC established a medical relief camp in Murshidabad during an outbreak of Gastroenteritis, treating more than 1,000 cases. It provided medicines and other relief materials during several floods and also during Cyclone Aila in 2019.

VIHC was active in numerous public health initiatives. It promoted reproductive health, family planning, breastfeeding, and antenatal health care in underserved populations. In the late ‘80s, it initiated AIDS control programs for sex workers in red-light areas, students at universities, youth and other at-risk groups in slums, and prisoners in jail. It advocated for human rights of prisoners.  VIHC also successfully fought against drug abuse by carrying out detoxification of heroin addicts

Recognizing that it could not fulfill its mission alone, education was an important component of VIHC. The members organized training programs on Malaria Control, First Aid, Community health etc. to other NGOs. They participated in several conferences on child survival, drug abuse and other public health issues.  VIHC even created health care training for over 6,000 Police personnel.

VIHC established a health complex in Sankua, Diamond Harbor to provide preventive and curative health care in rural outlying areas. The building is also used to educate and provide lunch to children in those villages. With your donation, we hope to sustain the mission and legacy of its founder, Dr. Abanindra Kumar Nag, who died on May 26th after contracting COVID-19.

Copyright Small Biz Cares 2021 - All Rights Reserved
Back To Top